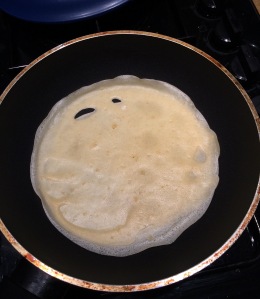 I was staying at a friend’s over New Year, and on the morning of 1 January, she offered an egg-based breakfast: scrambled? poached? pancakes? I chose pancakes, of course, and she asked if I minded having the first pancake.

‘Of course not,’ I said. The first pancake is often not quite right – the pan not hot enough, the chef not quite reaccustomed to the required pour and turn. But how can you have pancakes two, three, four and five without that slightly sub-standard first pancake?

A different egg-based homily has it that you can’t make an omelette without breaking an egg or two along the way. The seemingly innocuous saying – which came into English in the late 18th century from the French – has long been connected to political upheaval, with those eggs being broken bodies. It’s a metaphor, a Slate journalist argued in the dying days of 2013, ‘born of blood’, and one that we should dispense with.

To eat the first pancake is a softer metaphor, though, and one which could apply to any number of situations. The pan warms, the technique improves, the senses clamour for more. 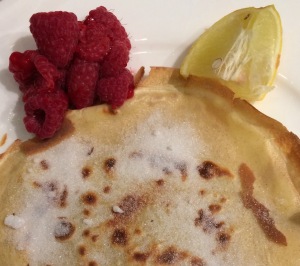 In the writing life, no book could get written without the first draft. It will never be the best version, but it has to be made. In literal, pancake terms, you could simply throw it away, I suppose, though that would be a shame – it’s never that bad (and often, as was my case on 1 January, it was rather good). In metaphorical terms, the first pancake is entirely necessary. A bit misshapen, undercooked, the technique not quite yet there in the roll of the wrist, the joyous toss into the air, the gulping down (for me, always with lemon and sugar), mmmmm…

It takes a bit of practice, and a lot of redrafting, to write well.