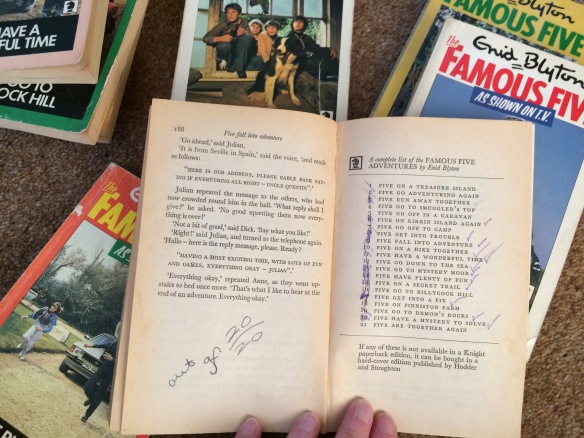 My academic work falls into the disciplinary fields of publishing studies and history of the book (you can find more about my research here). One of the sub-fields of the history of the book is the history of reading, the area that – as book historian Robert Darnton put it – ‘remains the most difficult stage to study in the circuit that books follow’ (from ‘What is the History of Books?’). Empirical reading histories can nonetheless be traced in a range of ways: through borrowing records of libraries, for example, such as those found in Perthshire’s Innerpeffray Library, or in accounts of reading in letters between correspondents or in private diaries (an excellent resource for which is the Reading Experience Database), or in marginalia (such as those in William Gladstone’s extensive collection of books housed in Gladstone’s Library). The excellent primer A History of Reading was put together by one of my Stirling colleagues, if you want to find out more.

A recent trip to my parents made me pull off the shelves old copies of Famous Five books. I was partly reminded by the publishing of Enid Blyton for Grown Ups parody titles in the run-up to Christmas (sample titles: Five on Brexit Island, or Five Go Gluten Free), but also by the memory of what I’d done with these books, which I’ve already written about briefly. 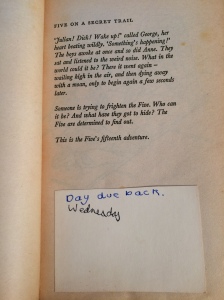 Like many bookish children, I’d tried to make my own library (though it was hard to persuade borrowers to visit), and the evidence of the ticket holders are still there (though none of the tickets – where did they go?). In some titles, I’d recorded where I’d got the books from (reminding me of the specific shelf where the books were stored in our local bookshop). In others, I’d ticked off titles I already had, and done sums to work out how many there were left to acquire.

I’d also marked all my books out of 20 (with quite a grade variation – from 8/20 to 20/20 in the copies to hand), and used my Puffin name plates to indicate that the puffins were engaged in the same activities as George (obviously an early crush). In the front of another, I’d also itemised which of the titles I owned, and which my brother. (I found some of the ones that belonged to my brother; they had less marginalia and no grading.) This – I am sure – was indicative of some sibling rivalry/internecine book-owning strife.

Looking at these material objects made a whole load of reading memories come flooding back, but also left me with some gaps in remembrance, and also a question as to what were my grading criteria. Some might say that Enid Blyton wrote to a formula, but to one child’s mind there was a high degree of differentiation. 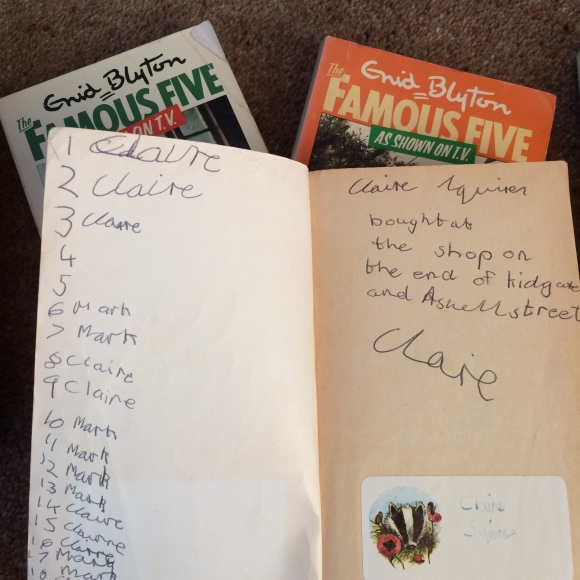 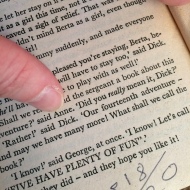 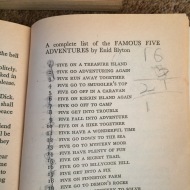