Last night as part of Book Week Scotland, I produced ‘Bath Books’, an evening of aquatic literary delights at Glasgow’s iconic Western Baths. I’m a member of the Baths, a glorious Victorian swimming pool featuring Turkish Baths, saunas and a steam room, and the evening was a great way for me to bring some of my literary work to an unusual venue.

The sauna suite was transformed for the evening into an events space, with audience members welcomed to bring up drinks from the bar below (passing on the way the Baths’ floor mosaic created by Alasdair Gray).

The evening featured a series of readings from works by Scottish writers, across poetry, fiction and non-fiction, including some by authors who are members of the Baths. We were also lucky to have contributions from actors, some of whom were also members of the Baths. The audience was promised murder, competition, and intrigue, as well as imaginative dives into the depths, encounters with magical aquatic beasts, and meditations on the restorative powers of water.

We kicked off the evening with a reading by David Anderson from Robert Louis Stevenson’s Kidnapped. In the section, Davie swims for shore after a wave knocks him off the boat. Next, we stayed outdoors but moved into the 21st century, with an extract read by Louise Ludgate of Amy Liptrot’s memoir The Outrun, in which the author swims in the ‘gaspingly cold’ seas off Orkney. ‘One morning,’ writes Liptrot, ‘the sky is reflected in the flat water and I’m swimming in the clouds.’

Andrew Greig’s At the Loch of the Green Corrie was our next text, read by Chris Dolan. In it, the author hunts for a loch in Assynt, heading there to fish in tribute to his friend the poet Norman MacCaig. Following the prompt, we moved to a sequence of poems invoking swimming through the ages, from Anne Stokes’ ‘Freestyle’, read by Julie Martis, to John Burnside’s ‘Learning to Swim’ and ‘Old Man, Swimming’, both from his collection The Hunt in the Forest, read by David Anderson.

We then changed tack and moved to 1950s Glasgow, and into the Baths itself, with an excerpt from Gordon Ferris’ crime novel Bitter Water. In the book, the protagonist joins the Club. ‘It was bliss,’ thinks the character, before he is chased by knife-wielding intruders through the Baths.

The first half then concluded with two readings by Chris Dolan from his own novel Lies of the Land. His protagonist Maddy Shannon is also a Baths member, and her attempts to get fit brought laughter from the audience. 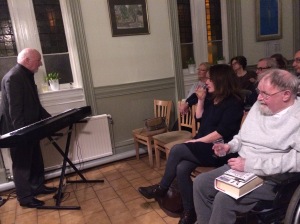 After the interval, David Anderson treated everyone to some music with the perfectly pitched The Seasick Song, in which we joined in the chorus, singing ‘mal de mer’. Next up, we changed the tone with an extract from Pippa Goldschmidt’s The Falling Sky. The image of a dead sister’s swimming costumes, ‘still all around the house, like the discarded skins of dead animals’ made for a beautiful reading by Louise Ludgate.

We then turned to another poetry segment, with a further contribution from John Burnside (‘Community Pool’, from Black Cat Bone) and two from Robin Robertson, ‘Donegal’ and ‘Swimming in the Woods’, from his collection Swithering. Julie Martis then read Kathleen Jamie’s ‘The Whales’ (from The Overhaul), and gave an enticing rendition of Liz Lochhead’s ‘What the Pool Said, on Midsummer’s Day’ (from Dreaming Frankenstein and Collected Poems).

We continued in the realm of fantastical beasts, with Jean Rafferty reading a section from her novella ‘The Seal Woman’ from The Four Marys. Jean had taken the watery theme of the evening to heart, wearing a dress adorned with fishes, and reading bare foot. The programmed part of the evening then ended with David Anderson attempting (and more than succeeding) Edwin Morgan’s ‘The Loch Ness Monster’s Song’ (Morgan’s own version can be heard here).

To complete the evening, Alasdair Gray read from some of his own work: a short story from his epic Every Short Story collection, and then a selection of poetry.

The evening ended, and we adjourned to the bar.

Reflecting on the evening while lying in bed the next morning, I thought about further immersive literary events*. Perhaps one in a bed shop?!

*In organising the event, I was partly inspired by Ellen Wiles, who is researching a PhD at the University of Stirling on live literature, as well as being the organiser of immersive short story events.